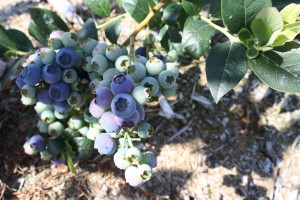 The blueberry harvest period for Oregon in 2013 was compressed. Weather conditions in the Spring, early heavy rain, followed by a dry period until Summer, contributed to all the blueberries ripening in a span of a couple weeks. Usually the berries ripen throughout a four or five week period and pickings can be spaced out. With all the berries ripening in short order some farms had trouble keeping up.  Blueberries must be picked promptly or they will spoil on the bush.

O’Berry was able to avoid any trouble with our harvest, however, and managed to have three pickings on the entire 10 acre field.  The summer sun took a break on picking days and the berries enjoyed the cooler air while they waited to be transported to a processing facility at a neighboring farm.

At the end of the harvest O’Berry ended up with 96,000 pounds of berries which were processed, packaged and shipped up to a Canadian grocer.  Hopefully the Canadians enjoyed the berries.

O’Berry’s bushes are still not yet fully mature, so yields have been doubling year over year as the bushes grow up.  If the harvesting trend continues, the farm should see about 190,000 pounds in 2014.  Plants mature at about six years after planting.  Given that the bulk of the field was planted in 2008, that would make 2015 the first full-production harvest of the field.  That doesn’t stop the farm’s growth, though.  With an additional six acres planted in 2013 it should be able to continue our increase in total berries harvested into 2016 and beyond.